The rain is triggering the start of the Eel River 2016-2017 fall Chinook salmon run and the Eel River Recovery Project (ERRP) is starting its fifth annual effort to monitor abundance throughout the watershed. Dozens of people participate as volunteers helping with dive counts in the lower Eel River, joining main river kayak expeditions to count salmon nests or redds, and providing observations and evidence about migration and spawning activity throughout the watershed.

In the first two weeks of October, Chinook salmon have been swimming up out of the estuary and moving into a few larger lower Eel River pools. Sustained high Eel River flows last winter caused bed mobility and resulted in positive changes for salmon migration. Numerous shallow riffles where salmon risked stranding last year are much deeper this fall and easier to pass. ERRP documented adult Chinook in the deepest pools upstream to Scotia, with the largest concentration in Fortuna pools. No dives were conducted because of potential for swimmers itch and crowding of fish in shallow water, but there was clearly a total easily over 1,000 early run fish in the lower Eel River as rains began.

There is no evidence of fish health problems in 2016, unlike last year when ERRP documented significant problems with Chinook salmon blindness. The eye fluke that attacked the salmon requires a snail as an intermediate host and the number of parasites may have coincided with snail abundance. ERRP and the University of California Berkeley noted proliferation of a non-native snail, Radix auricularia, in pools of the lower Eel River during fall of recent drought years. Dive observations in October 2016 found that snail abundance was down substantially. Scouring flows this past winter seem to have also flushed many snails and their eggs downstream to the ocean. Thus, absence of Chinook parasitism may be as a result of fewer intermediate hosts.

Annual dive counts in the lower Eel River are the core of ERRP population estimates, but there has to be enough flow to flush the algae to make conditions suitable for diving, and the river also needs to drop and clear for teams to get an effective count. Given projected flows from the current series of storms, the earliest possible dive date would be Saturday, October 29. The Wiyot Tribe is an annual co-sponsor of the fall Chinook count and their staff participates in dives, including plans this year for use of scuba gear and multiple high resolution GoPro cameras. If the river rises and then drops to where salmon are spawning in main river reaches, kayak surveys to count salmon carcasses and redds will be organized. People interested in diving or boating counts may call ERRP Chinook Coordinator Eric Stockwell at 845-0400 to volunteer or follow the ERRP Face Book page for more information.

ERRP has added the use of drone technology to estimate the number of holding Chinook in selected pools. Drones are being made available the Friends of Van Duzen River and were purchased as part of a U.S. Forest Service “More Kids in the Woods” grant that got dozens of elementary school students involved in Van Duzen River studies in 2016. Film maker and steelhead guide Jason Hartwick joined ERRP on October 13 and captured clear drone photos of fall Chinook holding in a lower Eel River pools before the rain. 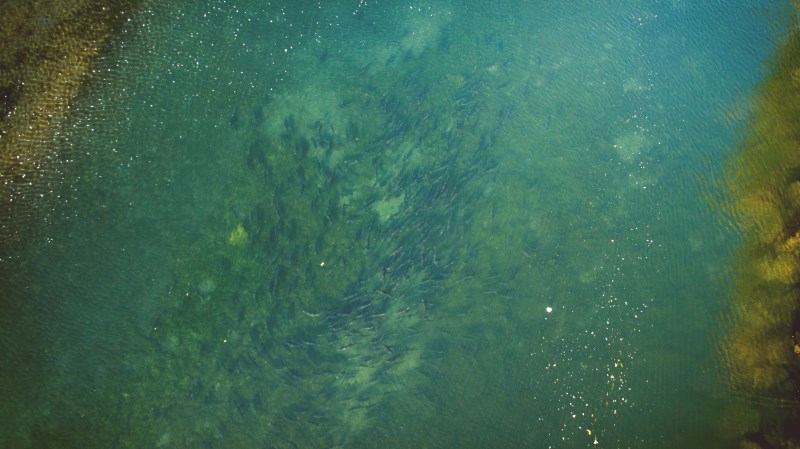 People who want to volunteer in the interior portions of the Eel River watershed and in tributary basins can contact ERRP Managing Director Pat Higgins (223-7200) to report when they see concentrations of fall Chinook migrating or spawning. ERRP then tries to join them in the field to video and photo document and determine the number of live fish present, spawning densities, and also carcasses.

The public can learn more about this year’s Chinook salmon run and other fish related studies ERRP has been conducting in 2016 by attending the ERRP 5th Anniversary Fish BBQ on Sunday, November 6 from 5-8 PM at the Monday Club in Fortuna. There is no charge for admission and the event will be preceded by an ERRP Board of Directors meeting. ERRP is now its own 501c3 non-profit corporation and soliciting membership and support from local businesses. Send $25 for an individual membership or $35 for a family to Eel River Recovery Project, P.O. Box 214, Loleta, CA, 95551.

Note: Featured image at the top of the post is of an Eel River fall Chinook salmon leaping in the Drake Pool in Fortuna in October 7, 2016. Photo courtesy of Eric Stockwell.