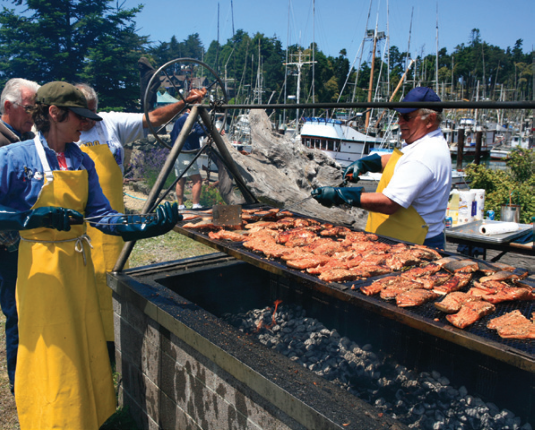 The World Largest Salmon BBQ is held each year on the first Saturday in July.

All proceeds are used to improve salmon populations on the Northern California coast. Click to see Projects that have been funded by the Salmon Restoration Association.

The next BBQ is scheduled for Saturday, July 2rd, 2022 from 11:00am to 6:00pm.  Eating is only one part of the festivities, there’s also live music throughout the day to keep things lively, and then there’s people watching and just having fun with family and friends.

Tickets available for purchase online. Tickets will also be available at Harvest Market in the Boatyard Shopping Center in Fort Bragg, and at the door on the day of the event. 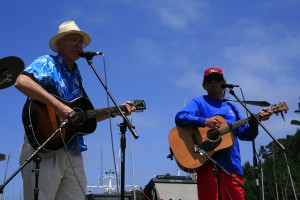 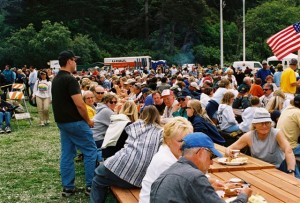 The Mighty T Bones performing at the 2013 BBQ

Eating that huge plate of salmon at the World’s Largest Salmon Barbecue is more than just delicious and a fun part of the Fort Bragg celebration of our nation’s most patriotic holiday. From its inception, the event has been designed to help bring back the salmon through the non-profit Salmon Restoration Association.

The SRA invites political and business leaders to be celebrity chefs each year as part of its educational efforts, an idea that has been part of the event since the 1970s. The money raised is used to fund actual restoration of legacy logging and development scarred streams and rivers, as well as community education. That fundraising has ranged from salmon hatcheries to training young prospective biologists. The SRA is always open to new ideas.

Buying a ticket to the 2014 World’s Largest Salmon Barbecue helped the Skunk Train and the Salmon Restoration Association get started on working together to help restore salmon on streams that flow into the Noyo River. With the Skunk Train already partnering with Save the Redwoods, this is a second recent big environmental effort. The plan is to restore the salmon that the Skunk’s tracks have interfered with over the decades.

The Salmon Restoration Association plans to partner with Trout Unlimited, the Skunk Train and others to help reduce sediment and improve stream crossings along the Noyo River. The SRA uses funds from its annual barbecue to help with salmon restoration and educational efforts. The proposal currently being considered seeks to reduce sedimentation into the Noyo River and its tributaries at nine high priority sediment source sites along the Skunk Train railway. Trout Unlimited hopes to partner with Pacific Watershed Associates to implement site specific prescriptions. Of the nine proposed sites, three have adequate culverts but will be treated for unstable soils that are likely to end up in the river during a flood. The other six sites contain failing and/or undersized culverts, which would be replaced, said Lisa Bolton of Trout Unlimited.

“Treatment of these high priority sediment source sites will address high priority coho recovery tasks in both state and federal recovery plans and will prevent a substantial amount of episodic and catastrophic sediment from entering the Noyo River and its tributaries,” Bolton told the SRA.

The SRA is currently working with proposals for working on the Upper Noyo with the Skunk and others. All involved hope to get going by 2016, but the actual project is likely to be changed during the grant process. The current estimated cost of the proposal is approximately $400,000, with SRA looking to contribute $30,000. The SRA has funded a wide variety of local restoration efforts, salmon studies and educational efforts.

As part of its educational mission, the SRA uses moneys from the World’s Largest Salmon Barbecue to help fund the SONAR (School of Natural Resources) program at Mendocino High School. The program began there in 2001 and has now accumulated 12 years of meaningful, scientific data which is collected in partnership with the Department of Fish and Wildlife (under the direction of Sean Gallagher) and California Department of Parks and Recreation.

These students study not only the biology and ecology of our local ocean, river and stream systems, but also learn the scientific protocols for actual field research, and how to write accurate science reports.

The data the students collect is used by California Department of Fish and Wildlife (DFW) and National Oceanographic and Aeronautical Administration (NOAA) and incorporated into their studies of marine and estuarial ecology.

High school sophomores and juniors are taught the scientific protocols for the study of adult and juvenile fish, redds (nests), crabs, shrimp and other species. Surveys are done in the Big River estuary, at a location near Camp 2 in the Woodlands and in the intertidal pools off the Mendocino Headlands. A few high school seniors serve as assistants. Many SONAR students have gone on to university studies and careers in biology and environmental science.

The Salmon Restoration Association has provided grants for the past three years to maintain the SONAR program as a two-course curriculum of natural science and English. Biology teacher Robert Jamgochian team-teaches the double course with Doug Nunn, who introduces students to literature about nature and hones their composition skills.

SRA is open to new grant applications from any group doing salmon restoration or education. Other than the Mendocino High SONAR program, there are several that SRA has funded and may do so in the future:

In fall 2012, the Big River Program of Mendocino Land Trust funded the removal of two dams: one from the Little North Fork of Big River and one from Water Gulch. These dams were preventing juvenile salmon from accessing 9.5 and 2.6 miles of suitable upstream habitat, respectively. The California Conservation Corps used jackhammers to remove the concrete structure on the Little North Fork while the Water Gulch dam required the use of heavier equipment.

Additionally, the Big River Program contracted with HDR Engineering to develop a design to address another barrier on lower James Creek. This barrier prevents adult coho from reaching upstream spawning grounds except in very wet years. The goal of the finished design is to allow for eventual passage upstream (4.6 miles) 80 percent of the time.

Barriers that prevent migration of endangered coho salmon (as well as some chinook salmon and migratory steelhead trout) to their natal streams are one of the major contributors to declining populations. Within the Big River watershed a few barriers still remain in the form of culverts that were improperly designed or installed and a few dams. These barriers may block adult or juvenile salmon from upstream migration, depending on the height of the structure and the velocity of the water.

Other projects funded in recent years;

• $5,000 for a salmon survey on Anderson Creek, a tributary to the Eel River.

The Skunk Train, which first cut a path to Willits in 1911 has recently become more environmentally friendly. When the Skunk Train suffered a disastrous cave in, Save the Redwoods League provided $300,000 to acquire an option for purchase of a conservation easement that will permanently protect the ancient redwoods along the train’s famous “Redwoods Route” including the Noyo River Watershed. The route that once helped haul the ancient forests over the hill now seeks to preserve and enhance the redwoods as well as restore salmon populations, greatly reduced by legacy logging and other human activity.