Salmon have historically been found in large numbers throughout the Big River watershed, but for the past few decades salmon populations have suffered a major decline. In an effort to halt this decline, in 1996, Coho and Steelhead Salmon throughout most of Northern California were put on the Endangered Species list by the California Department of Fish and Game. But from our sightings this past year, it looks like salmon may slowly be making a comeback on the Mendocino Coast.

Since 2001 the SONAR (School of Natural Resources) program at Mendocino High School has been conducting annual salmonid population surveys in the Little North Fork of Big River to provide important baseline data for the California Department of Fish and Game.

In the 2010/2011 survey year the SONAR crew recorded 23 live Coho, 5 Redds and 7 Coho carcasses. These recordings are especially momentous since only one fish was recorded in the 2008 survey, along with three redds. Redds are spawning areas for the fish. In the 09-10 survey no fish were sighted, but nine redds were surveyed. 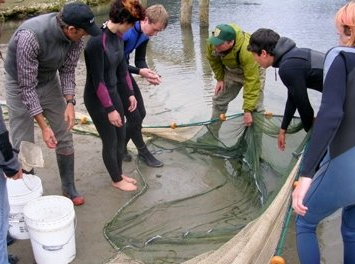 The School of Natural Resources at Mendocino High school has been conducting salmonid surveys in the Little North of Big River since 2001.

Grant Request: Presently funds have been cut from the SONAR budget and the ability to perform scientific studies has been greatly impaired. The funding to team-teach SONAR has been cut.

Team-teaching creates a two period block (for a total of approximately 3 hours – twice a week) which allows SONAR to effectively perform scientific field studies throughout the year on a regular basis. This grant will help provide funds to restore team teaching

Four surveys were conducted by Mendocino High School’s School of Natural Resources (SONAR) in the Big River Watershed. Each survey was performed alongside optimal water conditions to observe the arrival of upstream salmon populations for approximately two hours each day – on 1/12/12, 1/26/12, 1/31/12, and 2/2/12. Three surveys were done on the Little North Fork of Big River, and one was performed on the Big River Main stem: delayed varied seasonal rainfall caused this change in survey sites. These surveys estimated the adult salmonid populations in each area, by analyzing the total amount of live fish, salmon carcasses, and present redds. Seven redds and ten fish were observed (three Steelhead and seven Coho). The Big River Watershed is an important salmonid spawning habitat, providing a habitat for populations of Coho and Steelhead salmon. Coho and Steelhead salmon are an endangered species in the Pacific Northwest. SONAR has been conducting this survey each Winter since 2001, allowing salmon populations to be effectively compared; in the Winter of 2011-2012, Coho and Steelhead populations were relatively low.

Healthy spawning habitats are necessary for the prosperity of salmon populations (Edwards, Richard T., Gende Scott M., et al, October 2002). Thus, it is important that the spawning habitats are observed, and the spawning adults are tallied: this task is regularly executed by the Mendocino High School’s School of Natural Resources (SONAR). Furthermore, this survey has been performed in the Big River Watershed since 2001 – a majority of the surveys taking place on the Little North Fork of Big River.

Many situations in the Big River Watershed has adversely affected the salmon life cycle, specifically through spawning habitats; fishing, logging, agriculture, and ocean factors such as commercial fishing are specific examples. Logging, foremost, creates excess sediment in Big Rivers tributaries, “which has contributed to severe [salmon] population declines” (United States Environmental Protection Agency, December 2001). Logging also creates ubiquitous canopy loss. This, in turn, creates a warming of the tributaries causing unsuitable salmon habitat. Moreover, ocean factors, such as the commercial competition for resources and exploitation of ocean populations, have created a disruption in food sources and a low rate of returning salmon, respectively. In addition, polluted runoff as a result of agriculture empties into the Big River Watershed, thus causing inadequate spawning grounds. Ultimately, such over exploitation creates a conspicuous limiting factor that has caused a severe drop in the Big River Watershed’s Coho and Steelhead salmon populations (http://zebu.uoregon.edu: Environment Science 202).

Before performing studies, the SONAR class trained in many ways. Students were taught to identify different species and sexes by different characteristics, such as color or the general shape of the mouth. The class studied redd identification both in the class an on site. The class of 2011-2012 had also performed previous studies prior to their salmon surveys, which helped to prepare them for the process of salmon surveying.

Upon the observation of a fish, different data was recorded based on the species, gender, size and habitat. If alive, students attempted to leave the fish undisturbed, and to allow it to continue, while observing what data they could through sometimes turbulent or murky waters. If a salmon carcass was found, more extensive data could be collected. If the entire carcass was intact, full length could be accurately measured, along with the previously mentioned data. Then a floy tag was clipped to its jaw, showing that it had been found. Additionally, when a fish was found, live or dead, a flag was taped nearby, with the label of SONAR, followed by the current date.

Female salmon lay their eggs in nests which are known as redds. Redds are commonly noticeable through the water by a lighter color and depression of the streambed. This is due to the spreading of sediment by the salmon whilst digging the nest. If a redd was found by a student, its dimensions and substrate size were measured with a stadia rod, along with the width and depth of the stream. A flag was also taped as with the observation of a fish.

The 2011-2012 executed a survey of spawning salmon in the Winter of 2011-2012, where seven redds and ten salmon were observed. This is comparatively good compared to recent years. The redd counts stayed similar to previous years, which is a good sign for upcoming class studies. Steelhead sightings also increased, due to the class’ survey occurring later in the season (because of late seasonal rainfall), since greater Steelhead populations travel upstream later than Coho in Winter.

Mendocino High School’s SONAR class has performed surveys of salmon spawns in the Big River Watershed since 2001: the class travels along a specified tributary and tallies the amount of observed redds and salmon. Although, bias might be present due to a few factors. Foremost, there was a lack of rainfall prior to the conducted surveys, which delayed the migration of salmon upstream. Secondly, the SONAR class traveled in groups, and may have startled the salmon. Lastly, SONAR is conservative when observing redds: if the verification of a redd is questioned, it is omitted.

Since 1996 Coho and Steelhead salmon have been put on the endangered species list. (Arnold, Saraya, Dooley, Wyatt, et al. February 10, 2009.) In 2001, the SONAR class began monitoring the habitats and populations of these species in the Little North Fork of Big River and has continued recording their data to date. The results from previous classes has allowed trends to emerge in the data, and until the 2010-2011 SONAR class, increasingly fewer fish were being seen. However, in the 2010-2011 class they saw twenty five fish, which was more fish seen than in any year since 2004-2005. The 2011-2012 SONAR class is also seen as breaking the trend with ten fish seen, and though counts were not as high as the preceding year, possibly due to a lack of rainfall, this year’s study still shows progress in the salmon populations. This is good to see, since for four years straight increasingly fewer fish were being seen, leading to a record year of zero in 2009-2010. Redds have been staying fairly stable though, with counts at an average of 8.66 annually in the past 6 years, with very little fluctuation. This shows that even though populations may have been decreasing, spawning rates were staying consistent, showing hope for upcoming years. With the growing amounts of data, and the increasing awareness of the situations regarding salmon in the Mendocino area, it seems that salmon populations may continue to rise in the future. 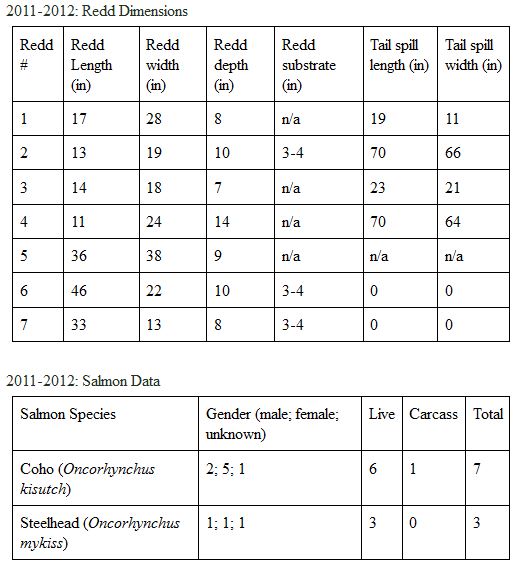